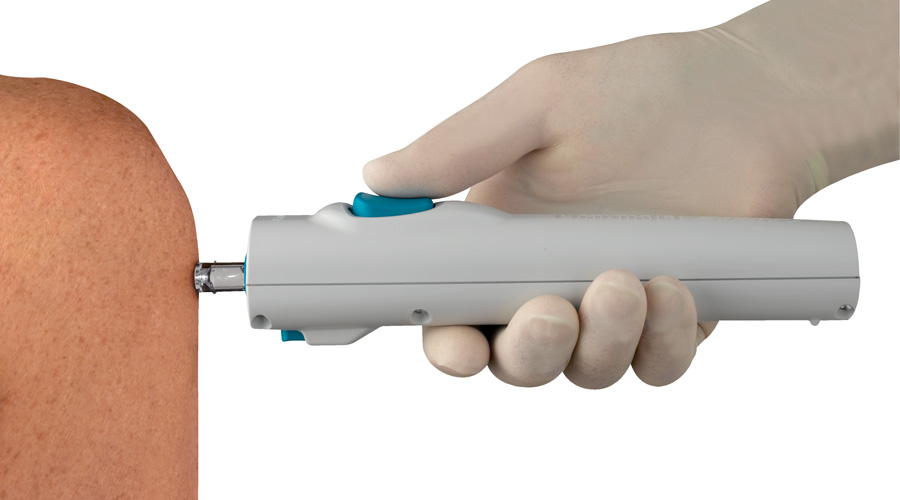 Needles are a big reason many patients opt out of protecting themselves with vaccinations.

One company, however, is working to eliminate needles from the vaccine process entirely.

“The PharmaJet Needle-Free Injector minimizes injection-associated fear and anxiety, and since there is no needle, there is no chance of needlestick injuries or needle reuse,” said Ron Lowy, chairman and CEO of PharmaJet.

The PharmaJet Needle-Free Injector eliminates the use of needles by delivering vaccines intramuscularly or subcutaneously. A narrow, precise fluid stream carries the vaccine through the skin, administering the vaccine safely and effectively and in less than one-tenth of a second.

Although the technology is still new, initial responses from patients and health care providers have been positive. A PharmaJet survey of patients who received the Needle-Free flu shot found that 96 percent were satisfied with the experience, 93 percent would choose it again and 92 would recommend it to others.

And, a survey of health care providers found that nearly half believe PharmaJet Needle-Free technology has the potential to increase vaccination rates by 10 percent or more.

Currently, PharmaJet technology is FDA-approved for use with the AFLURIA® flu vaccine, and it holds the Performance, Quality and Safety pre-qualified certification from the World Health Organization.

“PharmaJet is the first and only jet injector company to have completed a clinical trial specifically designed to demonstrate safety and non-inferior immune response with a flu vaccine,” Lowy said.

The PharmaJet Needle-Free Injector could be the boost your pharmacy’s vaccination program needs to grow and succeed.

“In a market that has historically been very competitive, the needle-free option provides a unique and compelling differentiator for independent pharmacies to attract and maintain customers,” Lowy said.

For more information on the PharmaJet Needle-Free Injector, visit pharmajet.com.

Needle-free vaccinations have the potential to reduce many problems surrounding vaccines today. Check out these numbers about needles and health care.

800 million – Number of injections administered worldwide each year for immunizations

42 – Percent of injections administered worldwide each year with reused equipment

18 – Outbreaks of viral hepatitis in the U.S. due to unsafe injection practices between 2001 and 2011