Is Diabetes Care a Good Business Opportunity for Pharmacy?

For those in the business of healthcare, Type 2 diabetes should perk some ears. More than 30 million people in the US suffer from the chronic condition, and another 88 million are on the precipice of getting it. It is the fastest growing disease in the country. By 2050, one out of three people will have diabetes, according to an estimate from the CDC.

Much has been said about the financial strain this prolific disease puts on the healthcare system. Type 2 diabetes causes a host of complications beyond blood sugar control, and the costs to the healthcare system are enormous. Pharmacists could be a crucial part of reducing those costs and unburdening the healthcare system, as studies abound proving pharmacist’s effectiveness in managing the condition. In all, under pharmacists’ care, patients keep their A1C levels under better control and have fewer comorbidities. When pharmacists get involved in diabetes management, patients and the public win.

But does your pharmacy business win?

“I’m a pharmacist and am very passionate about caring for patients,” said Travis Hale, PharmD, president of Remington Drug Co. in Remington, Virginia. “But to me it’s the financial and clinical together in one. We’re always talking about doing these things, but how can we get paid for them?”

A real look at the opportunity

“If an individual wants to become a diabetes educator for the purpose of helping patients, that’s great,” said John Motsko, RPh, CDCES, director of Apple Diabetes Center for Apple Discount Drugs in Salisbury, Maryland. “But if there are any financial expectations, be cautious. It’s hard to show any profit with these services.”

“Financially, the program itself is not very much of a money maker,” said Crystal Bartlett, PharmD, CDE, DSME program coordinator at Wynn’s Pharmacy in Griffin, Georgia, whose program has been around since 2001.

“After two years, we’re still in the negative,” said Hale. “We have to see some turnaround or we’re not going have a program.”

A bleak consensus. For a condition involving such large sums of money and such large numbers of patients, this might be a surprising conclusion. But the root problem won’t surprise anyone in the pharmacy business.

It comes down to reimbursements. All four pharmacies said that patients are very unlikely to pay cash for diabetes education, which means pharmacies have to rely on reimbursements from third-party payers. But coverage from commercial insurance is almost nonexistent, and for pharmacies who have managed to get some insurers to cover it, it is a battle requiring significant time and resources to win.

“Although I am a certified diabetes educator, we are not recognized as a provider and cannot bill directly for education services,” Motsko said. Private insurers don’t have incentive to invest in long-term outcomes of patients because they could switch to a new plan next year. So pharmacies have to fund their program almost entirely through Medicare who, because its participants are in it for life, will reimburse a certain amount for diabetic education.

But relying on those reimbursements, it turns out, is difficult. “We would get some payment from Medicare, but if we factored in all the hours we were spending with these patients, we were getting roughly three dollars an hour. And that’s just not worth it,” Cranford said. Some of their diabetes services included a local grocery store tour for patients in the community who had a limited ability to travel, as well as one-on-one counseling.

Motsko said the same. “From a financial perspective, diabetes education reimbursements do not meet costs of services,” he said. “We had hoped to be able to at least break even on expenses and reimbursement, but so far that has not happened.” His program has been running for seven years.

It was mentioned by the pharmacies that under the right circumstances, it’s possible that diabetes education programs could be profitable. But for that to happen, on the reimbursement front, you need a lot of people enrolled in each class at the same time. Reimbursement for group settings is about $34 for 60 minutes, which isn’t much on its own. But if you take 20 patients through a 10-hour program, that nets $6,800—a high return for ten hours of time. If you only have five patients, though, that drops to $1,700—a negligible return that doesn’t even recoup the costs.

But even if you managed to get high enrollment numbers, it still may not add up to break even. The total expenses of a program involve much more than showing up to teach a one-hour class. Costs include salaries for the educators and pharmacists for completing substantial administrative work. Wynn’s program takes around 20 hours of work a month, and Remington’s up to 40. “In terms of the documentation and billing and precertification and follow-ups and denials and insurance calls, it gets pricey to pay for that,” Hale said. “There’s always billing issues, then people don’t show up, people don’t pay.” And those costs don’t include any marketing, whether it’s the time spent soliciting physicians or cash spent on advertising campaigns. And if you want to pursue commercial payer relationships, add that to the tab. “Over these last two years we probably easily have fifty grand in it,” Hale said.

Another caveat is that the only way to qualify for reimbursements at all is to be accredited, either through the AADE or ADA, and that process takes upfront money and time. And then your program must meet requirements that all take valuable time to implement, even if you don’t find them worthwhile. A couple of the pharmacies interviewed noted that they might not reapply for accreditation once theirs expires.

All four pharmacies mentioned how wonderful the programs are in theory, but unfortunately in practice aren’t sustainable on their own. “In an ideal environment I think it would have been a phenomenal program,” Cranford said.

The other business perspective

Although the reimbursement road is difficult, there are other ways to think about the business opportunity of a diabetes program—like capturing new, lucrative patients.

“We know diabetes patients spend the majority of money of any disease state in the pharmacy,” Hale said. “They’re all on other medications and most likely will be buying supplements, other things over the counter—foot issues, eye issues, skin issues—so there’s a lot of other product that they’re buying.”

Motsko estimates that between the classes and one-on-one counseling, Apple Discount gets 300 patients to attend their diabetes education per year. Many of those people become loyal patients, though he doesn’t have hard data on that.

Bartlett said, “On the back end it does bring in a lot of patients to us because they see us as the diabetic specialist around. It also builds a lot of relationships with physicians because they’re calling us to see how they can better care for their patients, which in turn ends up increasing the overall pharmacy business as well. Well over half of the people who come through the program become patients of ours. The percentage is maybe higher.”

But even this approach has its caveats. “What the customer spends and what we are reimbursed is very misleading,” Motsko explained. “If we dispense a CGM device or insulin or a GLP-1 product costing hundreds of dollars, our profit may only be a few dollars and sometimes we even lose money on a prescription due to poor reimbursement.“

Cranford had to stop billing for diabetic test strips altogether because Medicare denied every claim, demanding a host of records that were not feasible for any pharmacy, such as every patient’s logbook. Even the big box stores in her area gave up on billing.

Hale takes an even broader view of the benefits, seeing his diabetes program as the way to get his foot in the door of provider offices. Once those relationships are established through his diabetes educators, he hopes to get a share of more services like annual wellness visits, med reconciliation, transitions of care, and more. “Let’s let this be the thing that opens the door because all offices are interested in it. But then we also need to be able to grab other services on top of it to really make this program sustain itself,” he said.

Working in the office, he can bill under the provider and take home higher reimbursements. They already have a contract with a provider who bills an E&M code, and 80 percent of that revenue goes to Remington.

All four pharmacies have had a hard time generating interest. At Payless Family, attendance started off hot, with 20 to 25 patients every month, but over time it dropped to two patients. Wynn’s Pharmacy averages between two to four patients per class. Apple’s classes seldom have more than 10 attendees. “All the programs are having difficulty in attracting patients,” Motsko said. “Last year we only had about 50 percent of those referred to us ever return a call or a message to register for an education session.”

Low enrollment is due to a couple of factors that aren’t easy to overcome. As Motsko mentioned, patients simply aren’t motivated enough. “Individuals really are not engaged in their self-health the way they should,” he said. “Very few care and that’s sad to see. As my friend and owner says on many occasions, I think we care more about the patient’s health than they do themselves.”

Bartlett echoed the sentiment. “Patients just don’t see the importance of it,” she said. “That’s the biggest challenge.”

Another issue is that some pharmacies have had pushback from physicians and hospitals, whether it’s a competitive resistance, lack of trust, or simply a lack of enthusiasm. Motsko and Hale encountered offices and hospitals who did not want to share the patients or who wanted to keep referrals within their network.

Physicians are the primary gateway to diabetic patients, so getting them on board is critical. For each of the pharmacies interviewed, getting in with local physicians was their most important step in getting the program rolling and keeping it sustainable. Without physician buy-in, it’s going to be a very tough road.

Although reimbursements make a diabetes program difficult to sustain, especially without taking a broad view of the financial benefits, it’s no surprise that independent pharmacists have found a payoff beyond the financial.

“The interaction with patients has been the professional highlight of my 50-year career as a pharmacist,” Motsko said. “I truly feel we have impacted the lives of many of our community who otherwise would have had a difficult time managing diabetes on their own.”

“We’re doing a wonderful thing,” Hale said. “We are the perfect ones to do this.” 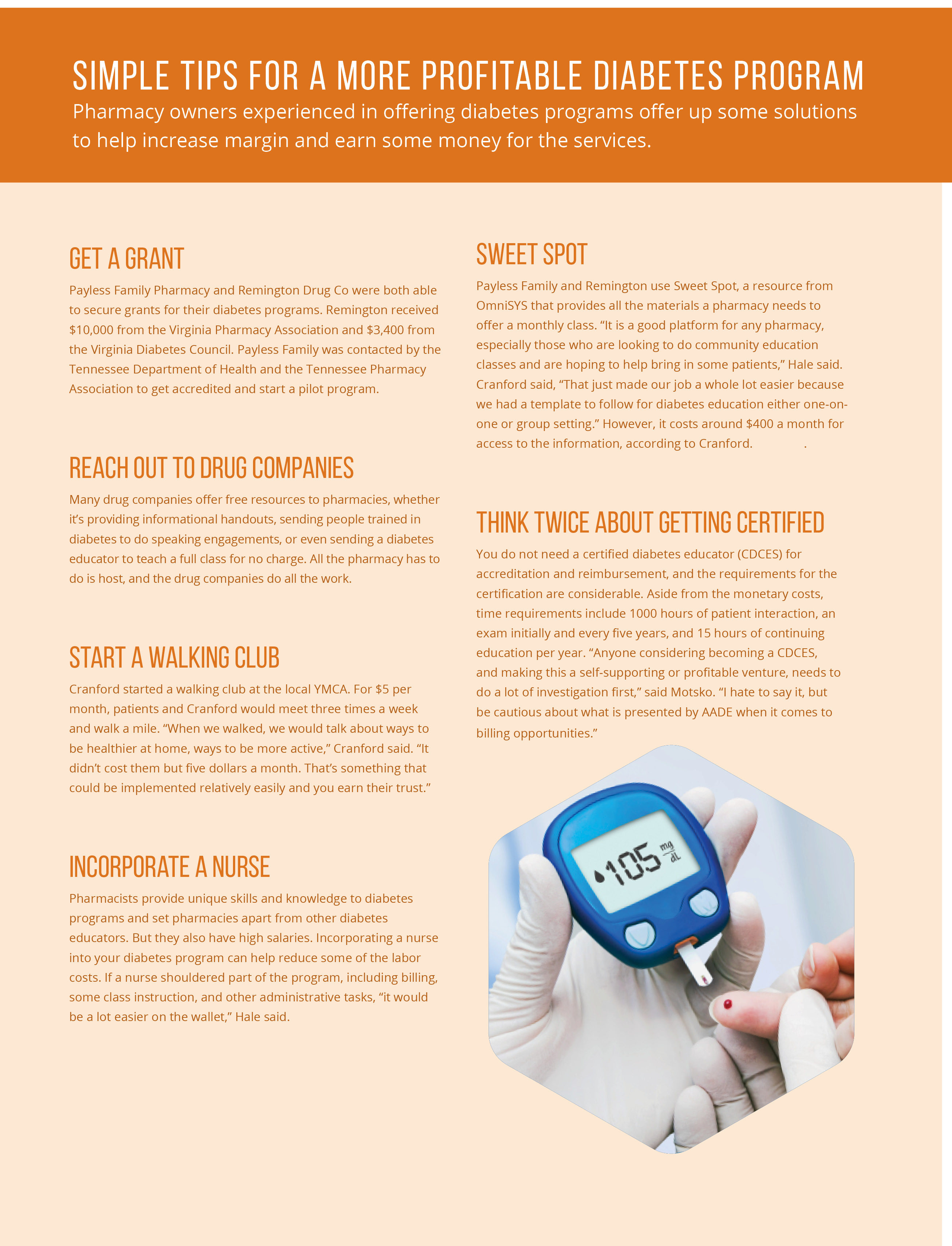