Is It Time for Your Pharmacy to Downsize? 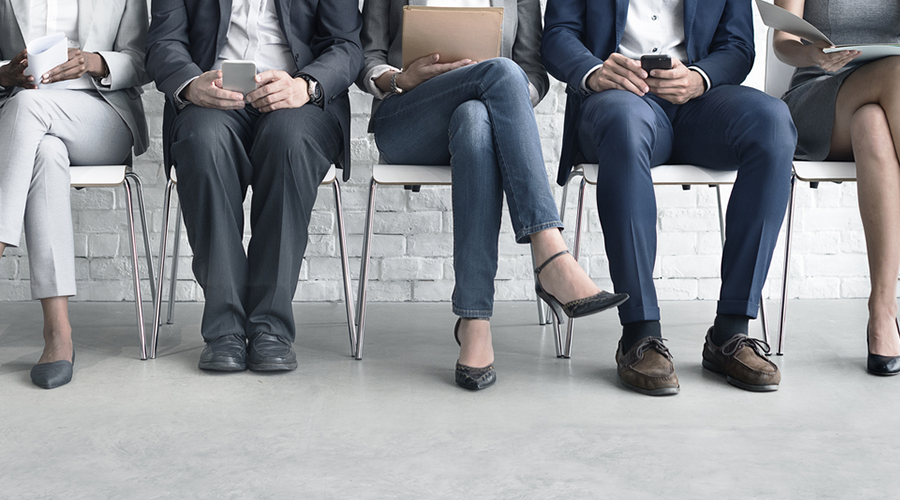 As the United States finishes up its tenth consecutive year of economic growth, independent pharmacy is in its fourth year of downturn. Salaries, prescription margins, and the number of existing independent pharmacies have declined each of the last four years. In this climate, more and more community pharmacies are forced to take make difficult decisions to keep their business alive.

There’s no doubt that making the decision to lay off part of their tight-knit pharmacy crew is the last thing an owner wants to do. But sometimes, it is unavoidable. “These are just things that are part of managing a normal, competitive business where you have to make changes as your market changes,” said Sandra J. Sucher, professor of management practice, Joseph L. Rice III Faculty Fellow at Harvard Business School. In her 20 years of experience, Sucher has done extensive research on layoffs and restructuring in companies as big as the Fortune 100.

Although nothing will make downsizing easier to do, it will be easier on your employees and on your business if you go in with a clear-eyed and empathetic plan. Even though it might seem cynical to plan for the worst, if you go into a downsizing under-prepared, your profits, your reputation, and the quality of your customer service will suffer.

“The kinds of downsizing events that make sense are strategic ones,” Sucher said, “when there is a mismatch between the resources that a business needs to have and the staff they currently employ.”

Before making such a business-altering choice, you should slow down and consider it very carefully. Sucher cites the French tire manufacturer Michelin as an example of how to wisely handle the downsizing decision. “They treat this aspect of their management process very seriously,” she said. “They ask really tough questions about the factories they choose to close. Questions like the ones a smart government official or journalist might ask.”

They have a committee investigate the possibilities, which then submits a recommendation to the executive board. This process ensures that layoffs are the only option—that there isn’t some other way to maintain the business that hasn’t been explored.

Michelin incorporated this process into its regular planning strategy after an intense decision about closing a factory in Hungary when demand for its tires had waned. With an official process in place, it would always be prepared for the next downturn at one of its factories. “They decided this was a process they were going to try to get good at as a corporation, because they knew it was an ongoing activity, and they wanted to be able to do it in a way that would be consistent with their values.”

While your pharmacy might not have the resources for an exploratory committee, you can still use the same preparation, caution, and thoughtfulness that Michelin uses when debating downsizing.

When Not to Downsize

There’s one certainty you don’t need a committee for: Never use layoffs as a quick way to save money. “For short-term profitability problems, downsizing is a bad solution,” Sucher said. The economic consequences of downsizing are often longer-lasting than whatever short-term issue a business is having, even if the financial outlook for the larger economy appears dim.

“Ask yourself, ‘If I knew that the situation was going to be way better in 18 months, would I do what I’m going to do right now?’” Sucher said. Recessions last, as a rule of thumb, around 18 months. “Most of the time, you’d see that this is not a good business decision, because by the time you’re done implementing all these changes, the world will have changed.”

If you dismiss staff as part of a last-ditch, cost-cutting frenzy, you may find that you’ve let go of someone who is crucial to the operation of your pharmacy and the team members that you have left are less productive. You could find your business hurting far longer than it would have if you’d left your team intact.

What sets a company apart during a downsizing event is having a plan in place and being transparent about what that plan means, Sucher said. Downsizing usually feels like a “senior management” type decision, where the staff doesn’t need to be included in the executive conversation. But not communicating to the employees is “a remarkably inefficient and demoralizing way to run an organization,” Sucher said. “One of the first mistakes is that companies underestimate the value of clear communication in offering people a rationale for why they are doing what they are doing. If you want to be trusted, you need to have some sort of pathway of communication, and when the time is right, you can let people know and give them advance notice.”

Even if the decision seems complicated—that there are forces in the industry beyond your control, or there are changes in demand that have put the pharmacy in a financial squeeze—it’s important that the employees who are leaving and the ones who are staying understand the conditions that are causing a layoff. “If you do those kinds of things, people will have a foundation to trust you,” Sucher said. “Because you’ve told them the truth, you’ve become more trustworthy.”

Managers might balk at giving employees advance notice that a layoff will be happening. Many assume that if employees know they’ll be losing their jobs, they’ll try to sabotage the business.

“I’ve studied companies that have told people as much as 18 months in advance that they would be moving their jobs, and because people trusted the company was going to help them try to get re-employed, they could live with the ambiguity of that,” Sucher said. In fact, job performance actually improved, because people wanted to prove to their employer that it would be a mistake to let them go.

This sort of open communication is especially important for the employees that will be staying on after the downsizing takes place. Transparency inspires trust and reassures remaining employees that there is still a place in the business for them even after some of their friends and co-workers have left.

Getting rid of staff will undoubtedly shake your remaining employees. How you decide to move on can be crucial to your pharmacy’s future productivity. “The real problem is with the so-called ‘survivors’ who are so demoralized and concerned that if you didn’t treat their colleague—who until yesterday seemed to be a valued member of the work force—with any kind of respect, what will happen if you need to do that to them?” Sucher said.

Team members should be given a chance, in small groups or one on one, to talk about the layoffs with their supervisor. They should feel comfortable asking questions and voicing concerns. “There is communication and acknowledgement that this has been an emotional event, and that people need a way to process it with some help from the company,” Sucher explained.

After the initial announcement, clearly establish how the pharmacy will continue operating. This can sometimes be difficult, because businesses often don’t know who has been doing the most important work until that person has been laid off.

The most important thing: remember your employees are human even as you make calculated decisions about your pharmacy’s business. “You really need to create a caring culture where people all the way through the hierarchy are treated as human beings,” said Sucher. She cites Michelin, which relies on the mission, “Respect for people, respect for the facts.”

By keeping decisions grounded in facts, she said, businesses will be able to have the difficult conversations about why they are downsizing—what the root cause of the problem is, and what the alternatives are.

While respect for facts is important, respect for people is essential. “It’s one of those things that every company says. Some companies absolutely stick to it, and people are proud to work for them,” Sucher explained. “For others, it just makes employees cynical, because they see the company doing things that clearly don’t show respect for the people working there.”

Although layoffs will decrease the size of your payroll, downsizing comes with real costs that become apparent over time. Even if productivity isn’t affected, quality will be. “People get so worried about whether they’re doing enough work that they don’t pay attention to safety and quality,” Sucher said.

When businesses downsize, there can be a three-year profitability lag between them and similar companies that don’t downsize, Sucher said. That’s because the surviving employees disengage as they worry if they’re going to be the next to go.

There’s a reputation risk, too. When companies are in a position to hire again, they might find it difficult to attract the best people because they’re known to have a casual attitude toward their employees.

One way to circumvent this is to provide support to employees when you have to let them go. “Companies that downsize well have a commitment to taking care of people and help them get reemployed,” said Sucher. When Nokia was downsizing, they provided five different options to help people get new jobs, including providing some assistance so people could learn new skills or helping them to start a business of their own.

“It always strikes me as unfair that we ask employees to dedicate their commitment and loyalty to a company,” Sucher said, “but then the company doesn’t have a reciprocal obligation to their employees.” Businesses that take into account the human cost of downsizing along with the financial benefits set themselves up for success in the future. 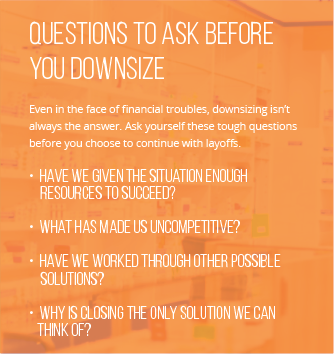 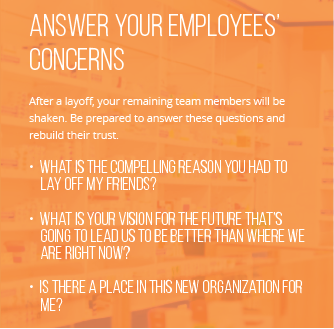