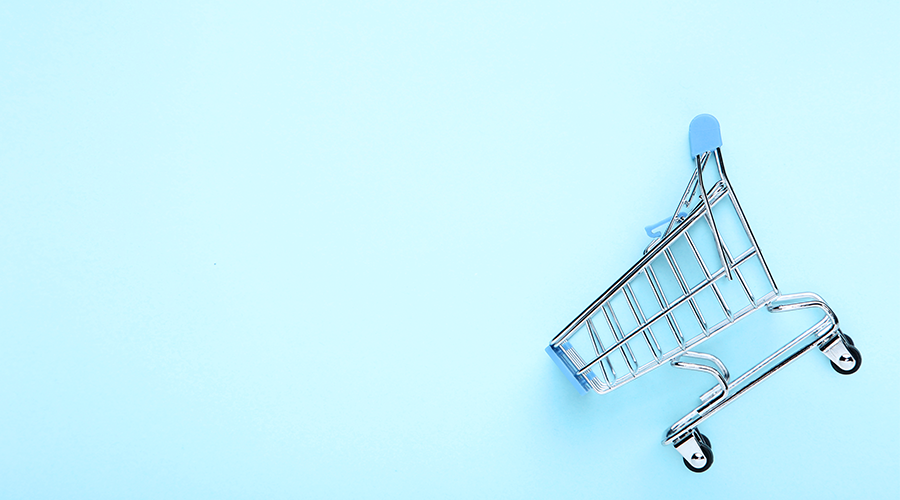 The margins on prescriptions are razor-thin and only getting thinner. But the merchandise in your front end is a different story. This is especially true for a particular kind of front-end product called impulse buys—items patients weren’t planning to buy when they walked into the pharmacy but put in their basket on a whim.

“Impulse buys on the front end of the pharmacy should be making 50 to 80 percent profit on each transaction,” said Mike Stringer, president of Dollar Days, a wholesaler that provides front-end merchandise to independent pharmacies. “By upselling and cross-selling customers filling prescriptions, a pharmacy has the opportunity to double or triple their average order per customer.”

The way he sees it, patients are already coming into the pharmacy to pick up their prescriptions, and pharmacists and other team members are missing out on a prime opportunity for profit if they aren’t actively encouraging front-end purchases. When a patient comes in to spend $10 or $20 on a prescription, impulse buys that double the basket size give pharmacies the ability to increase sales every day of the year.

“A pharmacy owner in today’s society needs to be retail-focused as much as they’re focused on filling prescriptions,” Stringer said. “They need to capitalize on every one of the customers they have.”

What makes a good impulse buy? 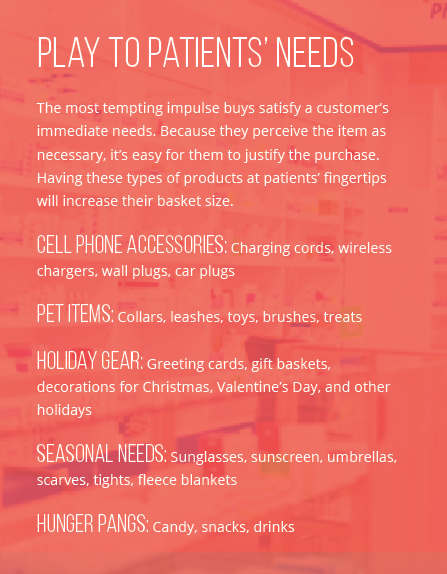 In order to convince customers to give in to their whims, you have to know what they want. While these wants can change depending on the demographics of your area, some items are tried-and-true winners.

For example, 68 percent of people in the United States own a pet, mainly a cat or a dog. “If I knew that as a pharmacy owner, then I would want to sell pet care items,” Stringer said.

Practically every single pharmacy patient has a cell phone in their pocket or purse when they come to pick up their prescriptions. Accessories for phones like charging cords, earbuds, and car chargers all make for compelling impulse purchases. “If my phone is dying and I need to charge because I have a meeting, I need to be able to get those things conveniently while I’m filling my prescription and not have to go to another store,” Stringer said.

Impulse buys should also be functional. “Does it solve a problem? I think about those little magnetic clips people put on their shirt to hold their reading glasses.” Good impulse buys often serve an immediate need. A patient is hungry, so they buy a snack. It’s raining, so they grab an umbrella. They forgot their mother’s birthday, so they pick up a greeting card.

Not every impulse item will sell well in every pharmacy. What works for an independent pharmacy in California might not work in New York or New Jersey, Stringer explained. Those geographic and demographic variations affect not only your products but also your prices. “You could have items priced at $100 and you’re in an area that can’t support that, or maybe you’re in a high-end area and you’re trying to sell items at a dollar,” Stringer said.

Wherever you are, you have to balance enticing prices with profitable margins. Stringer suggested that when pharmacies purchase an item for a dollar, they should price it between two to five dollars so they make anywhere from one to four dollars in profit.

Stay ahead of the curve

Some impulse buys may not meet an obvious need but still sell like hotcakes. They are fad items like SillyBandz, fidget spinners, and adult coloring books.

It can be difficult to know what’s going to be the next big trend. Stringer said he watches shows like Good Morning America and reads the newspaper to see what might be on the precipice of becoming a full-blown fad. But he also has another asset: his daughters.

“Kids are the greatest test market we have because they are part of that target demographic for impulse buys,” Stringer said. Toys make for good impulse buys because kids are vocal when they see something they want, pulling at their parents’ elbows and begging for them to buy it.

Right now, items related to the videogame Fortnite are flying off shelves. “There are 150 million people who play this game and are paying money to have these products,” Stringer said. “My retailers came to me specifically to ask for Fortnite items, and we were able to procure and supply them.”

To maximize impulse buys, pharmacies should be constantly updating their selection. At a minimum, Stringer recommends mixing up product selection once every season.

“Most of our pharmacy customers will order one case or one display of fifteen different items,” Stringer said. “They’re trying to find out what sells in their area.” They reorder the merchandise that clicks with their clientele and mark down the rest to sell it off quickly.

Keeping seasonally relevant items in stock is another way you can meet patients’ needs and solve their problems. “If a pharmacy has umbrellas during the rainy season, they’re going to sell a lot of umbrellas,” Stringer said. “If the items were purchased correctly and marked up correctly, they’re going to make a 50 to 80 percent margin on those items. It’s a win-win. It’s a win for the customer to have the items they need, and it’s a win for the pharmacy to capitalize on every visit from that customer.”

During the holiday season, it’s especially important that pharmacies keep their selection relevant. At a time when everyone is buying gifts and primed to spend money, stocking the right items can make your front end a one-stop shop. A comprehensive selection of holiday items can make patients’ days easier by helping them check items off their holiday to-do list. You might even have the item they forgot they needed and they’ll spend even more dollars at your pharmacy. 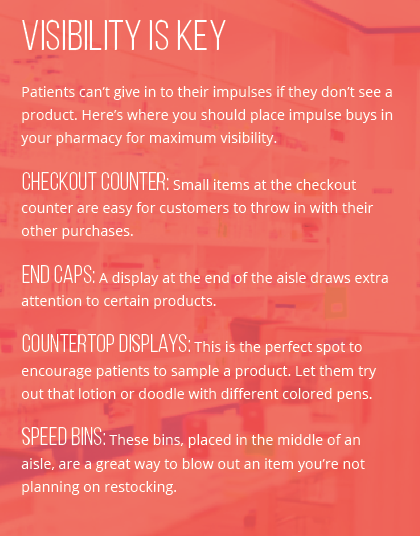 Where you position your impulse items can be almost as important as which items you choose to stock. Placing them at the checkout counter is “the number one way” to draw attention to impulse items, according to Stringer.

Setting up your aisles so patients have to walk through the entire store before they get to the pharmacy counter is another way to ensure they see all the products that might appeal to them. You can also draw attention to specific impulse buys by placing them on endcaps, on countertop displays, or in speed bins in the middle of an aisle.

Showing products in action increases their appeal as well. “We sell a lot of LED light-up dog leashes and collars,” Stringer said. “If the workers at the pharmacy turn on a couple of them so they’re blinking, that will draw customers’ attention to the items and they’ll buy them more frequently.” If you have Bluetooth speakers for sale, have them playing a tune so patients can hear the quality of the product for themselves.

Sampling products works especially well for toys. If children have the opportunity to play with an item in the store, they will be hard-pressed to let it go, and their parents will be much more likely to buy it for them.

Convincing patients to buy something that’s not on their list may seem like a hard sell, but it’s a necessary part of increasing your front-end sales and your pharmacy profit. Simply talking to patients about products can go a long way.

“What comes to mind is visiting my local grocery store,” Stringer said. “They ask me every time if I want ice or stamps. I always forget the ice because it’s not in the main part of the store! So it’s kind of a customer service thing.”

It also might draw attention to something the customer had not considered before but will end up making their life easier. As the saying goes, you miss 100 percent of the shots you don’t take.

“Pharmacies are losing reimbursements every day, and to survive and thrive against large chains, they need to utilize any way they can to upsell and cross-sell their customers,” Stringer said. “Impulse, holiday, and seasonal purchases are imperative to stay in business, to grow, and to be more profitable.”