9 Tips for Avoiding Confusion Between Drugs

Inside: Be aware of look-alike and sound-alike drugs to combat drug confusion in your independent pharmacy. These simple practices can prevent mixups and medication errors.

Mistaking one drug for another is more common than you might think. “Look-alike” and “sound-alike” drugs make it easy to accidentally grab the wrong medication off the shelf.

Drug confusion because of these similarities can lead to dispensing errors, which means patients might be taking the wrong dose of a medication or even the wrong medication entirely. To prevent these sorts of mix-ups, implement these best practices in your pharmacy.

Abbreviating drug names can add unnecessary confusion into the mix and result in medication errors. In a span of 15 years, the FDA received reports of 21 errors relating to the drugs Activase and TNKase. Both are sometimes referred to as “tPA”, making the abbreviation effectively useless.

Even when a pharmacist is sure there is only one drug that uses a specific abbreviation, it may not be familiar to the person filling the prescription. An unfamiliar abbreviation might put a technician in a position to make an educated guess, which leaves room for error. To avoid potential confusion, always spell out drugs’ complete names.

If you keep look-alike and sound-alike drugs next to each other, it is inevitable that someone will eventually grab the wrong bottle and create a medication error. Instead, you should store bottles that have similar appearances or names on opposite sides of the pharmacy. Physical distance reduces the chance that someone will accidentally pick up the wrong drug.

If you have a pharmacy robot, it can be useful in creating even more physical separation for look-alike and sound-alike drugs. By keeping one drug in the robot and the other on the pharmacy shelves, you’ll create different processes for dispensing the drugs, reducing the chance of mistakes.

When two drugs have very similar names but completely different dosage forms, it creates a noticeable distinction between them and makes them more difficult to mix up.

If it’s not possible to use novel dosage delivery systems, you can still include dosing limits for look-alike and sound-alike medications to help distinguish between them and avoid dosing confusion.

Tall Man lettering is stylized writing that helps pharmacy staff differentiate between commonly confused drug names. In the Tall Man lettering style, drugs are written with part of the name bolded in all caps to help distinguish dissimilarities.

Prednisolone and prednisone might be hard to distinguish on first glance, but written in Tall Man letters as prednisoLONE and predniSONE, the differences become more obvious.

The FDA began Tall Man lettering in 2001 with its Name Differentiation Project, and the Institute for Safe Medication Practices (ISMP) maintains an even longer list of drug names written with Tall Man letters.

A 2016 study by the ISMP found that 86 percent of respondents felt Tall Man lettering helped reduce drug confusion, and 52 percent could recall a specific instance when Tall Man letters prevented them from making a medication error.

5. Use generic and brand names

The generic names “vinblastine” and “vincristine” might be difficult to tell apart at first glance, and when vincristine is given to patients at a vinblastine dose, it can be fatal.

Fortunately, it’s much easier to tell the difference between their brand names — VELBAN® (vinblastine) and ONCOVIN® (vincristine). Whenever possible, include both the generic and brand name for look-alike and sound-alike drugs on unit dose packaging.

Create a special alert for look-alike and sound-alike drugs and place it on the bins in your pharmacy storage area. It will prompt pharmacy staff members to take extra care with these products and to double-check the NDC before dispensing.

The ISMP recommends never placing look-alike or sound-alike products in the “fast mover” section of the pharmacy because it creates a higher risk for mistakes.

When you are stocking shelves, manufacturer labels should always face outward and never be placed face down to create more room on the shelves.

When two bottles look nearly identical, it’s crucial that all the information on them is clearly displayed. The ISMP recommends never placing stickers or cross-out lines on bottles in places where they might obscure key information. For medications that could cause serious harm when dispensed incorrectly, create a special high-alert label for the bottle.

All stock should have the drug name, strength, expiration date, and NDC number on the label, and medication should never be unlabeled for any amount of time.

You can also include usage notes for patients and health care providers who administer medications to help prevent confusion.

Remove easily confused drugs from your normal stocking list if possible. Notice which generic manufacturers use the same stock bottle, label colors, and fonts throughout their product line and avoid ordering from them. By eliminating overlaps or drugs that can be easily confused for each other, you can circumvent potential problems.

Put as many safeguards against drug confusion in your pharmacy, and after you’ve done everything else on the list, memorize the worst offenders. When you fill a prescription you know has a higher risk of drug confusion, you’ll take extra care to get it right. Here are some of the drugs you should keep a close eye on: 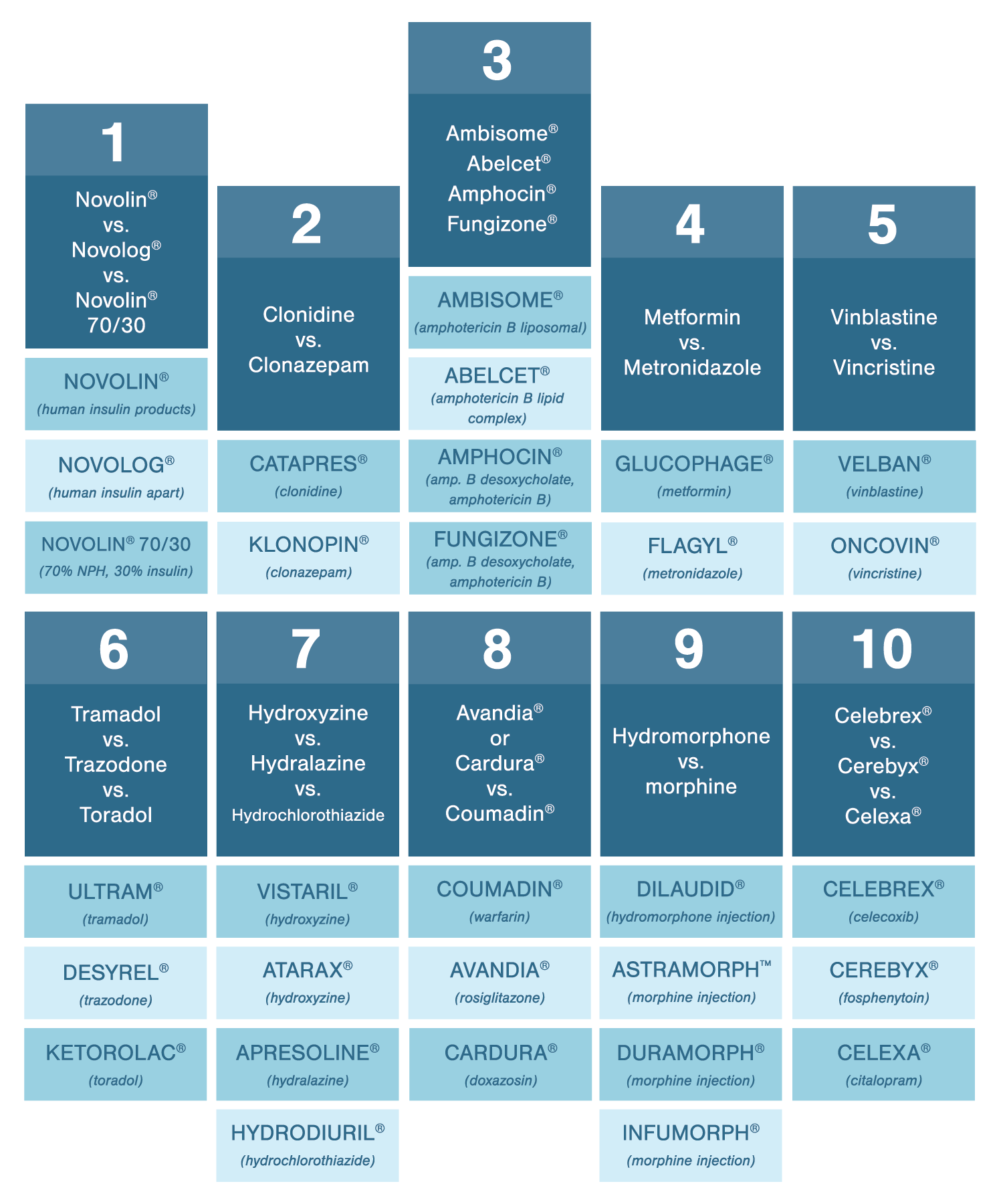